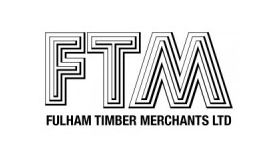 Our company was established in Fulham, South West London in 1984. The company moved to a better appointed site in Brixton in 1994 but maintained the name that had by then made its reputation. In 1998 FTM opened FTM Tool and Plant Hire next to the premises in Brixton. A second branch of the timber and builders merchants was then opened up at South Wimbledon/Colliers Wood in 2001 and Worcester Park depot was opened in 2007.

Since 2007 Fulham Timber have opened a further two sites, one in Balham on Balham High Road, and a dedicated Sawmill facility in Colliers Wood, close by to the existing Colliers Wood branch.

The reputation of FTM has always been built on the excellent service on offer to contractors, builders and the general public. Responding quickly and informatively to enquiries, the expert knowledge given on the products FTM sell is an integral part of the bond with customers.

We do not have any reviews about Fulham Timber Merchants available right now.

This business has no reviews yet.